A lot has happened since my last race, because of this I apologize in advance that this post might be a little lengthy…

To start with I was in a car accident about four weeks ago. I was traveling legally through an intersection and was t-boned by a woman running the red light. My car was totaled and I had some serious whiplash.

My first thought was, “Oh no, what if I can’t compete!”. My “A” race, the USAT Age Group National Championships was only 3 weeks away. Not competing was NOT an option, I had trained too hard and too long. I was down a few days longer than I would have liked, but as soon as I was able to I dedicated myself to getting back up and running and saw many wonderful specialists who helped me to literally, get up and running. It was a rather large speed bump on my way to nationals but I took it in stride and did what I could with the time I had left.

Fast forward to Burlington, VT. Wow! If you ever have the chance to travel there, make sure you do, it is such a beautiful place! I was so glad that I had the opportunity to drive around with my Mom and Grandma. Race morning, woke up to coo, breezy  weather with minimal humidity, absolutely perfect weather I thought! Then I looked at the harbor, there was some definite chop!
I warmed up with my friend and fellow teammate Alex William Willis, who is also a member of the USAT collegiate recruitment program. Next thing I knew it was time to race! Waiting on the dock with the other girls in my age group there was an awesome energy, everyone was ready to race and bring their A game.

Initially, when I crossed the finish line, 2:17.30 later, I was pretty pleased with my time considering all that I had been through leading up to the race. I was 11th in my age group and 30th overall…until I was awarded my 2:00 penalty for blocking. Can we say, BUMMER! Even racing at Age Group Nationals, the biggest race of my season I still learned valuable lessons and you can be certain that I will never make that mistake again!
Now, I’d really like to thank my coach, Trista Francis, for supporting me out there. She raced the sprint the next day instead of the olympic so that she could be there for Alex and I. Her dedication as a coach, mentor, and friend is so appreciated! 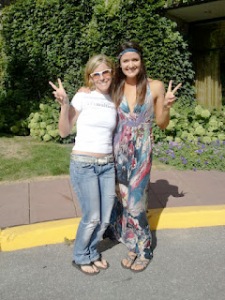 Thank you also to my fabulous sponsors this 2012 season, Zoolender.com, Rockwell Watches, and Challenge Handmade Tubular Tires. Your support and belief in me as an athlete has been crucial to my success so far this season.

…sorry, not finished yet! To cap off a fabulous weekend I was able to once again attend the post-race USAT collegiate recruitment camp with the renowned Barb Lindquist. It was awesome getting to work with her again, see where I had improved since last time and where I still needed work.

Okay and the last thing…Thank you Slowtwitch.com and Trisports.com for my 15 seconds of internet fame and making my blog go viral today!! A photo that was taken for Trisports summer catalog, showed up in the sidebar highlighting their sale on Slowtwitch. There was much dispute as to who the headless woman was until my friend kindly directed readers to my blog.

One more race this season! Racing the Toyota Cup Championships U.S. Open Triathlon in Dallas, TX as an Elite Amateur then burying myself for the winter… in off season training!