Oh hello again! It’s about 4:30 in the morning and I have to be at work at 9. Why am I up blogging you ask? Well, because its that time of year again! My annual crippling cold. Believe me this is not an event I mark down on the calendar, and in fact around this time of the year I do everything I can to prevent such a sickness. I guess between the Christmas craziness at work and a 4-day training camp immediately after, my body and immune system decided they were going to take a break.

So since my last post I did a few more races. There was the Trifest for MS in Arkansas, put on by Scott and Jo Rampy, founders of the Rampy MS Research Foundation. That was a really great race, the volunteers were awesome, my home stay the Sakalares’ were amazing, and I was so honored to be supporting their fundraising efforts through racing. 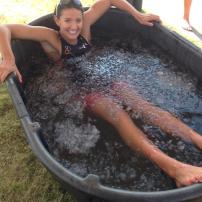 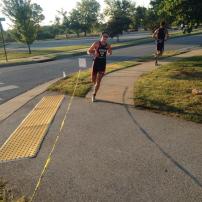 The next race was the Las Vegas Super Sprint Grand Prix. Similar to the format of the race I did in Milwaukee this was a super sprint distance that you go through twice, and in this case 4 times as there was a qualifier in the morning and the final that evening.

This off season I participated in Cyclocross to help work on my bike handling skills, pack riding, mounting, dismounting, hurdling while hauling my bike…okay so maybe that one isn’t in triathlon. It was a blast, and something I will definitely do again next year. 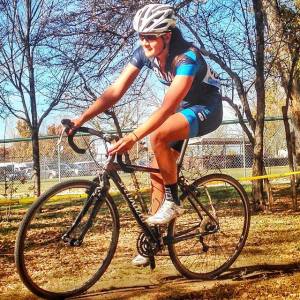 Most recently I have started working at lululemon athletica, originally just a seasonal position I’m hoping to stay on for a while longer. Whether or not they decide to keep me, I never realized how much fun holiday retail could be!  All of my coworkers are phenomenal people and they alone are enough to make me want to go to work. The company lululemon is also a lot more than I expected, they really care about making the lives of their employees and the people in their communities better.

Just a few stories from working around the holidays:

-The first was when I was back near the fitting rooms, I asked a gentleman if he had found any items he liked or if he needed another size on anything. He thanked me and told me he had and went to the front of the store to pay. A few minutes later he comes to the back and asks me, “Are you Zara Guinard?”. When I respond in the affirmative, I find out that he is a triathlete also and has followed me on social media for a while, he called himself a far-away fan. He wished me good luck with my 2015 season and went on his way for more holiday shopping. I just thought it was so so cool, one of my biggest goals with what I do everyday whether its training, racing, or working at lululemon is to inspire the people around me to work towards the best version of themselves.

-That same day I helped a gentleman who had come in looking for something for his girlfriend. I could tell he was anxious or nervous about something and it wasn’t long before he decided to tell me what. This sweet guy was just busting to tell someone. He looked at me and just beaming he says, I just bought an engagement ring to propose to my girlfriend. As he continues to tell me how in love with her he is and that they had been together 3 years and he wants to spend the rest of his life with her, he pulled out the ring to show me. It was a really touching moment, to see this man so excited to propose to his girlfriend. You could feel the energy of the love and excitement he was glowing with!

I really like working around people, it’s one of the reasons I was a server in college. I love meeting new people, hearing their stories, learning from them, and even if its just for a brief moment, connecting with them. I think that connections are really important, sure we could go through life solo, head down just doing our own thing, but what happens when you run into a wall? You might be able to climb over it your self, but sometimes you need others in your life who are willing to lift you up and over that wall.

This post has kind of started to ramble so I’ll wrap it up, please forgive my up since 2a.m. cold congested brain.

Since it is New Year’s Eve and resolutions are kind of the thing, my resolution this year is to make sure the people that I care about in my life know how wonderful they are and just how appreciative I am that they choose to be a part of my life and in turn let me be a part of theirs.

*all comments regarding lululemon athletica are my own.